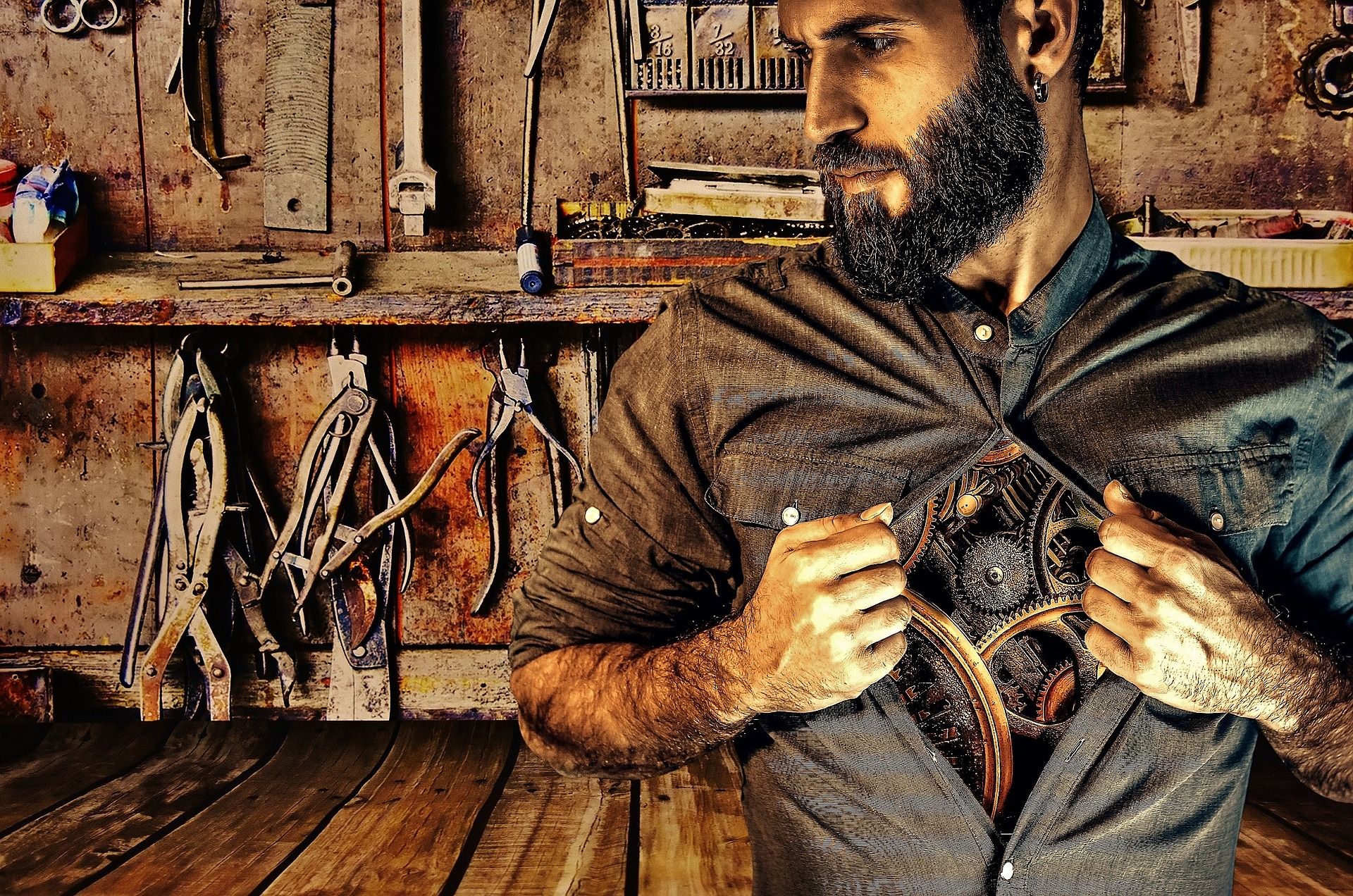 I am big into anything “self-help.” I’ve read the books, gone to the workshops, and spent a lot of money on therapists.

Being the type A personality that I am, this kind of comes naturally.

But when that drive turns inward– “pushing” “fixing” and “perfecting” YOURSELF, the implications of that can be harmful.  By saying that something needs “fixed,” you’re saying that there is something WRONG.  That inherently you’re not complete.

And you’ll notice that once you really dive into self-improvement, your “improvement” to-do list gets longer and longer each day!  You may start off saying that you want to get a handle on your anxiety. And all of a sudden you’re knee deep researching your money issues, father abandonment pain and how to be a better wife.

Finally, you’re so overwhelmed with YOURSELF that you want to give up.

The illusion of ever getting “there” in self-improvement is just that, an ILLUSION.  This isn’t the movies.  It’s not like a lightning bolt is going to rain down from heaven and poof an issue is 100% healed.

Healing is a process.  And one that will NOT happen if you’re committed to the illusion that your hurt and pain just needs to GO AWAY.

Your hurt and pain are there for a reason.  Are the main ones there because of experiences in childhood?  YES?  Are they your fault?  NO!  But they ARE a part of you now.  They make up the entirety that is you.  And all of you is valuable.

So what now?  I know you’re suffering.  I know you’re in pain and just want that one big issue to go away!  That’s why you’ve started this mad hatter quest for healing in the first place.  I am right there with you!

But what if we tried another tactic?

Here are 3 tactics I’m using instead of being an insane tyrant towards myself:

I know I know….you’re not trying to hear this hippy bullshit.  Aghhh believe me I get it.  I didn’t want to write it either.  But I did because it actually IS the answer.  At least it has been for me.  Hear me out. How do you treat your best friend? I listed out some of the characteristics that define my friendships:

What if you were able to give yourself all of these things?  I know that I definitely was NOT.  I was like an unforgiving dictator.  I didn’t know who I really was inside, nor did I care.  The only thing I cared about was being different than who I was.  Becoming “better.”

But that gets old.  And exhausting.  I woke up one day and was fed up with the self-hatred.  From constantly trying to fix myself.  And frankly, all that whipping I was doing with my self-help lash did not seem to be changing me.  I was struggling just as intensely as ever

I believe that Divine intervention that brings complete healing is few and far between.  Those of us who grew up in the church were led to believe that this how healing works.  It’s not.  And it sets us up for a lot of heartbreak in our lives. We’re left wondering when our magical healing moment will come.

“Have I not tried hard enough”?  “Is my connection with God not strong enough to allow such a life-changing moment“?  None of that is true.  You HAVE tried hard enough.  And the Divine has been there all along to help and guide. But believing that God is a big powerful man in the sky who extends his healing rod down from the heavens to special individuals is a very limited view. The Divine lives within all of us.  Always ready to support and heal.  It might just look different than what we’re expecting!

I may struggle with anxiety my entire life.  I hope not.  But it has been there since I was a child.  It is there for a reason.  I have learned to manage it, and it sits quietly in the corner most days. But since I’m human, anxiety is a part of life.  It’s nothing to feel worked up about.  Or to feel disappointed that I have not conquered it.  It’s apart of my physical DNA as a human.  And that’s ok!The key for me is not wishing it away or denying it.

One of the most heartening stories about our struggle can be found from the Buddha. On the day of his enlightenment, he was barraged by “Mara” a demon.  Mara tempted the Buddha with beautiful women and sent armies of demons to attack him.  But the Buddha stood firm and claimed the seat of enlightenment.  But wait! The story does not end there.  As Tara Brach recounts in her book Radical Acceptance:

“While Mara fled in disarray on the morning of the Buddha’s enlightenment, it seems that he was only temporarily discouraged.  Even after the Buddha had become deeply revered throughout India, Mara continued to make unexpected appearances.  The Buddha’s loyal attendant, Ananda, always on the lookout for any harm that might come to his teacher, would report with dismay that the “Evil One” had again returned.

Instead of ignoring Mara or driving him away, the Buddha would calmly acknowledge his presence, saying, “I see you, Mara.”  He would then invite him for tea and serve him as an honored guest.  Offering Mara a cushion so that he could sit comfortably, the Buddha would fill two earthen cups with tea, place them on the low table between them, and only then take his own seat.  Mara would stay for a while and then go, but throughout the Buddha remained free and undisturbed.”

I LOVE THIS STORY!  What an encouragement. Even after being enlightened for god’s sake, the Buddha still had to contend with his inner demons. Although I admit this is a bit confusing and disheartening at first, what this tells me is that working WITH yourself is a life long process.

It is a friendship.  An unconditional loving relationship with yourself. It is not something to feel defeated or sad about. It just IS. It’s just life.  It’s NORMAL.

Now we can all let go of the lie of ever getting “there.”  You know…. that state of mind we all think enlightenment will bring?

Instead of seeking a one-time magic potion to “fix” ourselves, we might as well settle in and make Mara that damn tea!

Again, many of us have been led to believe that we’re inherently sinful since birth.  After all, didn’t Adam and Eve prove that?  But logically does this make sense?  Have you ever held a newborn and looked into those sweet innocent eyes?  You would know in that moment that the idea that we are born into sin is absolute horse shit.The next time you find yourself grasping or striving to be better or to be something different than who you are right now….remember this:

You were born whole and complete.  The Divine lives within you, not outside of you.  So inherently you’re GOOD.  Not sinful.  You’re not a project that needs imperfections stripped away.  You’re a person who is valuable.  And worthy of love and self-friendship. Open your very heart to YOURSELF.  To see the good and the “bad.”  And then begin to see the “bad” as apart of your kaleidoscope.  It is apart of your human experience.  Not something to be pushed away or quickly resolved.  It is sacred.  And holy.  In fact, it is your ticket to freedom.  Freedom does not equal ignorant bliss.  Freedom equals giving yourself the love and acceptance that is so desperately needed.  And giving it to yourself every day, even when you feel you aren’t deserving

That is what heals.  That my friends is the only thing that heals.You’re only goal right now is to uncover the brilliance that is ALREADY THERE.

You don’t need to keep trying to attain anything because it’s already in your possession. I KNOW that is hard to believe sometimes.  It really is.  But if all you did for the rest of your life was wipe away the mud that covers the brilliance of who you truly are, that would be enough.

« Not the Sweet One: Who are YOU?
What do I stand for NOW? Beliefs after infertility »